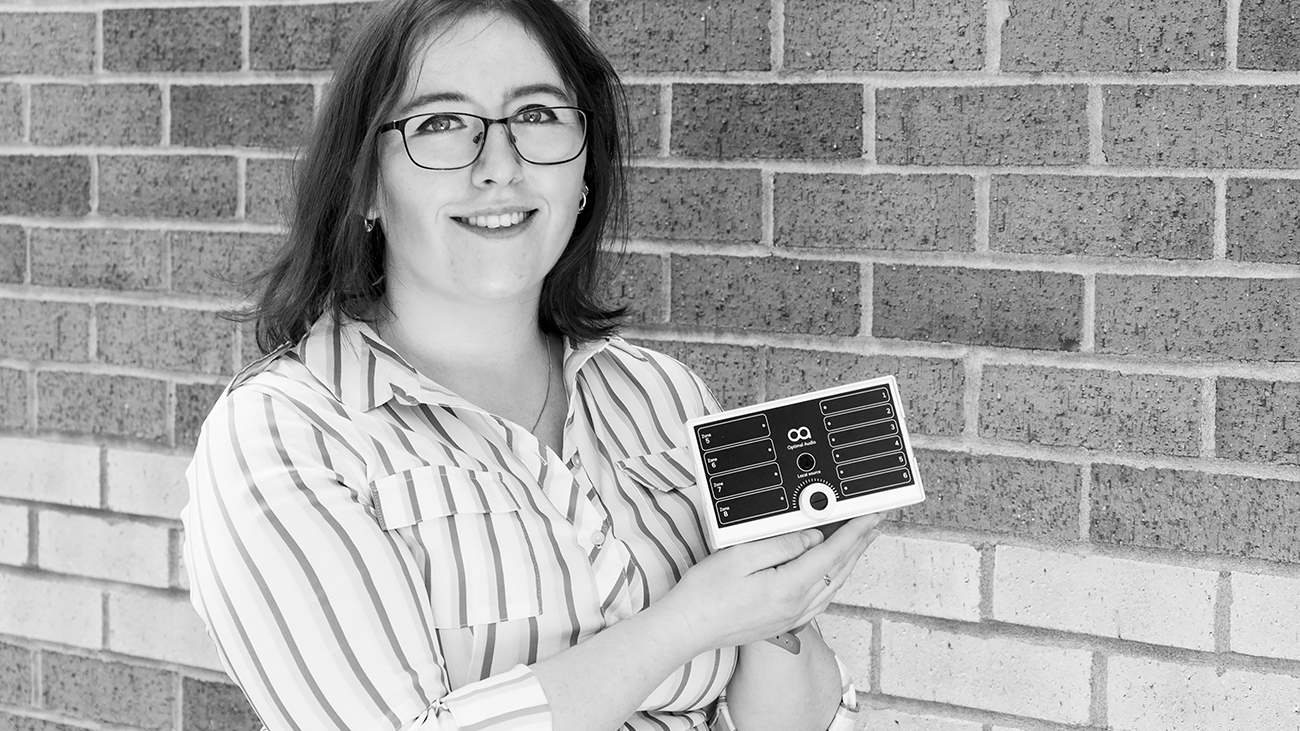 When Optimal Audio began its journey to simplify the somewhat opaque world of commercial audio, Managing Director Dom Harter placed great emphasis on creating a team that would take an open-minded approach. After all, if this often overly complex world was to be demystified and re-presented in an accessible and easy to deploy product range, being wedded to too many preconceptions would very likely inhibit progress. The audio knowledge and experience was, without doubt, present in abundance – the trick would be to retain a fresh approach throughout, and so avoid any undue influences from the past. In a move both inspired and calculated,  Product Design Engineer, Charlotte Critchley, was added to the team. A recent graduate of Loughborough University’s Industrial Design course, it was deemed that Charlotte would bring the necessary design expertise without the ‘baggage’ of a traditional audio background, thus offering a fresh ‘outsider’s’ perspective. She explains:

“During the early stages of my involvement I quickly realised that it was actually quite helpful not to have any pre-conceived notions about how things should be. Engineering Manager Matt Rowe gave me a rough brief and outlined the main principle, which was to keep things simple. He showed me a few examples of projects he’d worked on, so I could acquire a basic grasp of the concept, but I was very much free to explore my own ideas.”

Charlotte, tasked to work on the Zone (zone audio controllers with DSP and WebApp) and  Zonepad (Zone wall controllers), began to sketch out some ideas…

“I went online and found inspiration from a number of areas that weren’t audio related. It was all pretty minimalist in style, which seemed to fit the overall plan. There was a lot of to-ing and fro-ing to make sure I stayed on the right track as regards functionality, but it seemed that as things progressed, my approach was working. I started experimenting with some 2D imagery on Photoshop and Illustrator, and presented a range of ideas to the team. We had some discussions  on what we liked and didn’t like, and I’m pleased to say that the ones I leaned towards found favour with everyone. That gave me a lot of confidence that we were on the right track.”

At this point, Charlotte moved the process towards developing finalised 3D models through CAD, honing the designs to ensure that they had characteristics in common that could be harnessed moving forward into new products. Reflecting on the project, Charlotte points to the team’s undiluted enthusiasm for the task at hand:

“I think that bringing someone onto the project who was not steeped in traditional audio ‘norms’ was definitely a productive move. There was no resistance to the ideas that I brought to the table, just an honest conversation about how well they would serve the aims of the brief. It was really exciting to be a part of seeing something through from inception to completion – seeing the finished product and thinking ‘I did this!’. I know everyone on the team felt just the same, regardless of their levels of experience!”

Across a period of around twelve months, the product designer made a highly significant contribution to the Optimal Audio story, and in doing so provided the perfect metaphor for the company’s objective. In true Optimal Audio style, convention was put firmly to one side in favour of a fresh approach, with Charlotte playing a key role in helping to deliver a simple, yet highly effective solution…